It had rained all morning, and a small stream of water now ran down the slope of the playground outside. Miss Carbine stole a look out of the darkened window from the warm classroom to see the water hammering down the pane. She sighed to herself, knowing they would have to have the lunch break inside today. Her class were currently in pairs, going through the text books that she had put out that morning. It wasn’t too big a class, and she was able to manage the five and six year olds reasonably well with her wispy ways and mild manners. They hadn’t yet lost the awe of having a teacher, a special entity there to bestow wonders to them; and many seemed to want to impress still, which she liked.

Grace had been reading her book with Josh, going through the story of Finders the dog and his adventure in the supermarket. She was a good reader, and was able to point out to Josh where she felt he was wrong. Josh was slow, and he didn’t much care for the stupid dog or why it was even in a supermarket. He’d only ever seen one dog there before himself, guiding a man around who couldn’t see. The dog buying cereal seemed dumb to him, and he lost interest quickly and began to pinch Grace as she tried to read. If they had spoken more about the story, Grace would have agreed with Josh. The anthropomorphic antics of Finders seemed stupid to her also, and she did question its applicability to their development, further wondering if Miss Carbine; who was busy checking her phone, had given them the correct course book that morning. But she persevered, and tried to ignore Josh as he pinched her, pushing him away and trying to finish the story for them both.

The rest of the class didn’t seem to have any problems with the book or Finders, indeed some seemed to be enjoying it. Before long though, they had all finished and it was time for lunch. As it would be indoors today, they were allowed to sit on the carpet and have their food. An indoors picnic Miss Carbine suggested, helping them retrieve their lunchboxes from the tidy trays and bags. Grace went to the hallway where her bag was, and retrieved a cup from the side also for some water. Josh had pushed passed her, knocking her into the wall as he attempted to put something down Amanda Hartly’s back. She scowled at him as she steadied herself, a small red mark appearing on her elbow where she’d banged into the wall.

With her lunch and water, Grace sat on the carpet and began to eat. She heard the rain outside their classroom, and watched it drip down the glass like a hose had been aimed at them. Her best friend Michael was not in today, and Miss Carbine had told them he was unwell. She looked at her teacher now, who was helping Robert with his lunchbox that wouldn’t open, missing Michael.

She started to tuck into her own sandwich when she felt water pouring all over her. She momentarily thought the windows had smashed open, the storm breaching the small stronghold their tiny school offered. Then the laughter rose about her, coming strong from behind. Josh stood there, with an empty jug in his hand having poured the contents all over her. His fat face sporting a smile that reached from one chubby cheek to the other.

“Oh, Josh Devonport what do you think you’re doing!” Miss Carbine yelled, stepping the short way across the carpet to where he stood.

“That’s horrible Josh. You’re so mean.” Amy Standhall said, who was sat next to Grace but had escaped the projectile of the water. Grace sat there, the water pooling in her dress as she sat crossed leg. Her sandwich now a sodden, and a cold chill slithered over her body.

“Get over there right now!” Miss Carbine said, ordering the boy away from where the others sat. Miss Carbine, lovely as though she was, was not really prepared for the antics of children. She had the priorities of the situation confused, and though she took action with Josh; she somewhat neglected Grace as she sat there with the water in her knickers and the fat boy laughing on the other side of the room. Amy got Grace to stand up and shake off the water, and she went with her to the bathroom to help her dry off. Grace watched Josh as she left the room, being reprimanded by Miss Carbine, though she doubted he really cared.

A while later Miss Carbine appeared in the bathroom and helped Grace dry off completely, asking her if she was okay and not to worry about her dress; or her lunch for that matter. She would see to it that some food would arrive.

But Grace was no longer hungry. She was wet, and cold and angry at being humiliated.

She returned to the classroom, where everyone had carried on with their lunches. Some of the kids had finished and were playing with the building blocks near the blackboard. Josh had been ordered to get some paper towels, and was mopping up the water that spilt on the floor where Grace had quietly sat waiting to eat her lunch. He smiled at her as she came back into the room.

Teddy Evans came up to her and asked if she was okay, she nodded in reply; thankful that all boys weren’t as horrid as Josh. Miss Carbine whisked herself away to go get Grace some food, despite her protest. While the others played, Grace went to the back of the class where the storage cupboard was. She opened the door quietly and went inside. The small cupboard was stacked high with boxes and games equipment. They weren’t really allowed to go in there on their own, but everything was stored safely and there was no real danger to anyone. Unless you were locked in with the light off perhaps. Grace found what she was looking for quickly, and a few minutes later, slipped out of the cupboard and approached Josh.

“That wasn’t very nice what you did you know.” She said to him, hoping to find remorse there in those brown eyes. Josh scoffed and pushed her away.

“Aren’t you even sorry for doing what you did?” she asked him, given him one more opportunity to apologise.

“I said buzz off!” He said again, pushing her hard.

Grace stepped back, he eyes burning a hole through him. Then she smiled and said.

“You know, with Miss Carbine away there’s nothing stopping us getting the footballs and tennis balls out of the cupboard and playing sports. Shame we didn’t get to go outside today, huh?” She said, innocently. She knew Josh wasn’t too stupid, but even at her young age she knew how to manipulate certain people. She had said the magic world too, football.

“Why me?” Josh asked, somewhat suspicious.

“Well, they’re on the high shelves aren’t, I can’t reach them.” Grace replied, hoping the seed would manifest in Josh’s stodgy brain.

“Right, outta the way then.” He said, reaching his own conclusion that the break time indoors was dull and kicking a ball around might just be a fun idea. Grace knew Miss Carbine would be returning any minute, but she watched as Josh went over to the cupboard where the sports equipment was and watched him go in.

It seemed that fate was eager to abet Grace that rainy Wednesday while the other kids played in the classroom, and Miss Carbine chatted absently with one of the other teachers by the school kitchen. Once Josh had entered the small cupboard, the sports boxes had tumbled and the lights had gone out; plunging the whole school into darkness. No doubt the storm had downed a power line miles away, knocking the electricity off and unleashing chaos upon the small primary school. But the skipping ropes had found their way around Josh neck in the tumble of the boxes, and when the power had sprang back to life Grace quietly flicked the switched outside the small cupboard which kicked in the extractor fan which resided within, left over from recent renovations when their classroom used to be part of the old bathrooms.

The ropes worked quickly around Josh, tightening hard around his fat little neck. He lifted slightly off his feet, as the light bulb above him blinked in and out, and the ropes choked him into regret.

Grace returned to the others, pretending to be scared by the lights, and the storm. Smiling to herself. 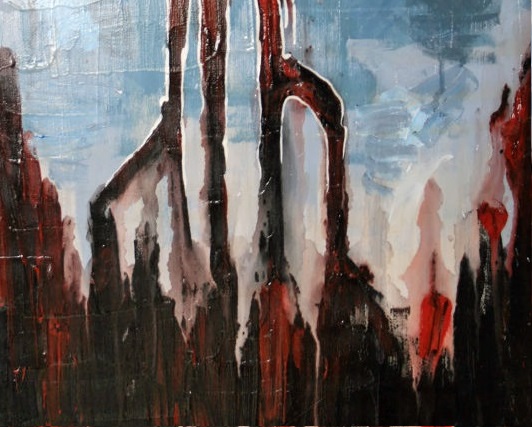 This talk of syncretic rhythm.
Finds me cowering under the pillows. Filling up my ears with atoms and ghosts.
It rocks me into unsteadiness.
These thoughts you conjure, they hurt me.
Your words are like weapons, sometimes they cut too deep.
Your blitz came and went, leaving my cathedral of love intact; if not surrounded by smoke and dead souls.
Standing at least.
I sing out a lullaby and light a candle here in the dark.
My sky machine is set to 7, and stars cascade like a celestial waterfall.
Blood on the rocks, bodies in the water. Drowning in the Milky Way.
If you lick my skin, you will not taste milk and honey.
If you bite my flesh, all you will see is bone and cartilage of sorrow.
The blood drool of your passion, a butchery banquet.
The smell of revenge in the air sends you up again.
Higher, over the moon and into my bed.
Into my head.
Ripping apart my lonely grey. Making my eyes dazzle gold like a bruised sun.
As I crawl back to the sea.