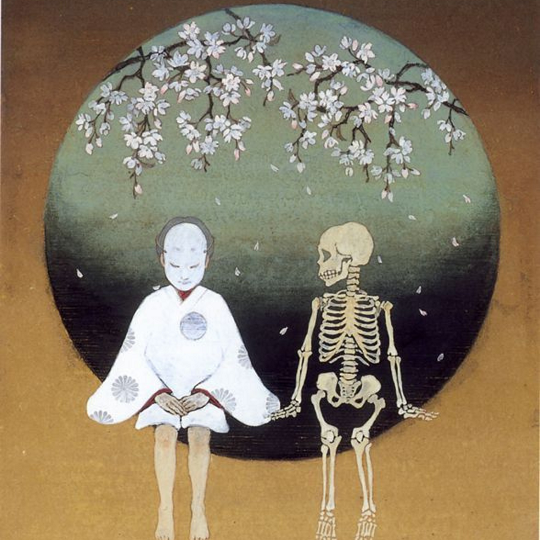 His heart, now the colour of his wife.
Ashen grey and broken.
The urn smashed, scattering them both across the clouds.
Little flecks of life stuck on the window of the world.
As the volcanoes rumbled and the gods groaned.
Down they both came in the rains.
Licked up by the wood spirits and the humans below.
Pooling in the heart of the world.
Cells and shells, finding the seabed of the soul.
Undulating to the sound of time.
Those tears of the gods which fell in this passing.
Are drunk only by the sinners, like sweet wine.

His brow, wet from the rain, cast skyward.
A heart yearning for explanation and soothing.
His climb monumental, each step a weight of a world.
The spirits plucked his heartstrings like a lyre.
Coursing a music in his soul.
The mountains surrounded him, closed in like monster teeth.
A wife held close still.
Tiny grey fragments on his skin.
Parted only by an urn and disbelief.
Soldiering on, he watched Apollo bury the light for another day.
Darkening his journey and settling into his bones.
Light air and fables coiled around him as he reached the summit.
The fates had been wrong, he was to die on the ascent.
Strangled in the thin air and half-hearted inclination.
Here’s mud in their eyes he thought as he looked beyond the clouds.
A flickering light, and eye to mystery.
Shimmering into view like many untold stories spat from a fire.
The great mount, the seat of all and divine rose into view.
His heart melted into honey as the sight expanded in his eyes.
Before it turned to stone, unable to stand the wonders before him.
Knowing the climb had just been steps towards the sacred.
Tiptoes on the precipice at the edge of the world.

Show the world who you are.
Dripped in honey and absinthe.
Hovering by a flame.
All parts, never the same.
As they try to push you under a reason.
A statement, a label, or part treason.
When you smash the brackets of age that constricts.
And you pull down the gods for a closer look.
They’ll see you reflect in their eyes.
Please, memorise their apology.
And wave as they pass you by.